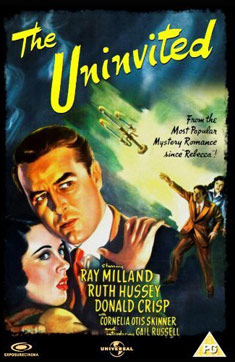 While vacationing on the English coast, composer Rick Fitzgerald (Ray Milland) and his sister Pamela (Ruth Hussey) find an abandoned 18th-century house and decide to buy it. The owner, Commander Beech (Donald Crisp), associates it with the tragic death of his daughter and is willing to part with it despite his granddaughter Stella's (Gail Russell) objection. The Fitzgeralds move in and soon find themselves, with the help of Stella, battling it out with two very prickly ghosts.

Based on Dorothy Macardle's novel Uneasy Freehold (1941) which was published in the United States as The Uninvited (1942).

Most horror movies, especially those made after the 1960s or thereabouts, tend to be loud, busy, and full of big moments. The Uninvited is a bit of an anomaly, being for the most part rather more nuanced and understated. Yet, 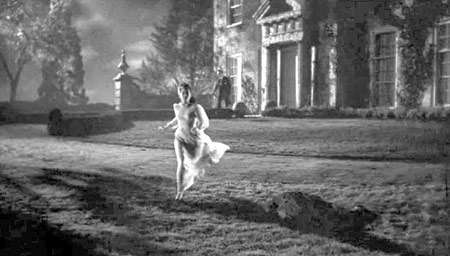 it still manages to provide suspense, thrills, and chills and comes off as immensely satisfying. Like some of the films of Val Lewton, it's more concerned with suggesting rather that showing, and therefore lets the viewer's imagination work harder and for greater rewards. Of course, this would count for little and indeed would backfire if the screenplay and direction were less polished and assured; fortunately, both are top-notch -- atmospheric, taut, inevitable yet surprising, and filled with delightful touches.

The Uninvited is greatly aided by its cast, especially Ray Milland, who is charming, debonair and commanding; Donald Crisp, who is appealingly gruff; a delightful Ruth Hussey; and Cornelia Otis Skinner, who gives a wonderful lunatic turn. True, Gail Russell is slightly bland, but she doesn't really damage the film - especially not as shot by Charles B. Lang, whose cinematography is top-notch throughout and is key to the film's ultimate effectiveness. The Uninvited is highly recommended, whether one is a ghost flick fan or not.