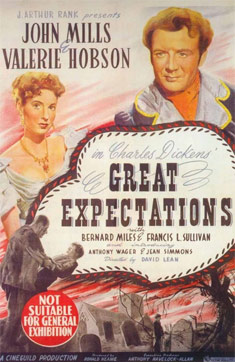 In this Dickens adaptation, orphan Pip (John Mills) discovers through lawyer Mr. Jaggers (Francis L. Sullivan) that a mysterious benefactor wishes to ensure that he becomes a gentleman. Reunited with his childhood patron, Miss Havisham (Martita Hunt), and his first love, the beautiful but emotionally cold Estella (Valerie Hobson), he discovers that the elderly spinster has gone mad from having been left at the altar as a young woman, and has made her charge into a warped, unfeeling heartbreaker.

Based on the 1861 novel by Charles Dickens.

Think of the name David Lean and chances are miles of desert, a camel or two and a certain Lawrence will spring to mind. But 16 years before his Arabian adventures, Lean took on another novel, Charles Dickens' Great Expectations and created one of the best literary adaptations ever made. Edged with humour and a surprising dollop of horror, his story of Pip, a blacksmith's apprentice who comes into a mysterious inheritance, works beautifully even after sixty years. 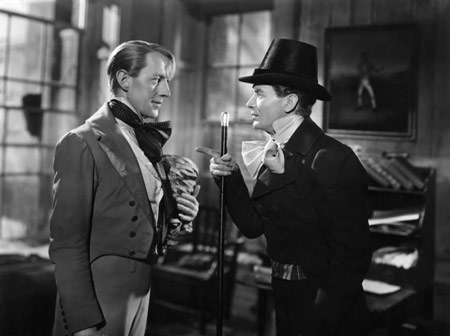 As he would do with Oliver Twist two years later, Lean judiciously uses the bits of the book that he liked and ditches the rest. The result is Dickens' tome, condensed into cinematic moments that deserve their place in movie history. The young Pip's encounter with escaped convict Magwitch in a wind-torn graveyard is scarier than any of today's bloodless teen horrors; his cruel education in the decaying Gothic mansion of the jilted recluse Miss Havisham far more haunting.

The cast also do their director proud: Jean Simmons is brilliantly snotty as Miss Havisham's young charge and heartbreaker-in-training Estella; John Mills, at the age of 38, manages to be naïve and likeable as the 21-year-old Pip thrust into polite society by his unknown benefactor. Even Alec Guinness as Pip's bequiffed, blond new best friend Mr. Pocket turns a bit part into an unexpected delight.

Lean also lands the distinctly British elements of the story - class distrust, unspoken love - bang on target. But it's the director's skill at combining a rollicking pace, atmospheric cinematography, and characters that you really care for that makes this one of the most definitive Dickens movies on screen.