Lorelei and Dorothy are showgirls and best friends on a luxury liner to Paris for their next gig, where a private detective (Elliot Reid) has been dispatched by the millionaire father of Lorelei’s fiancé (Tommy Noonan) to catch her in a compromising position and stop the impending nuptials. It’s a set-up for plenty of compromising situations and Hawks plays the broad sexual humor for what is surely a male audience. But while he photographs them like cover girls, he never, ever allows them to play second fiddle to the men. These two little girls from Little Rock are thoroughly loyal to each other and always in charge.

Based on Gentlemen Prefer Blondes: The Intimate Diary of a Professional Lady (1925); a comic novel written by American author Anita Loos.

If I had to use one word to describe Gentlemen Prefer Blondes, it would be, breezy. There isn’t any depth whatsoever to Gentlemen Prefer Blondes, but for as long as it lasts it’s a fun ride. The movie flies by and is equal parts charming, witty, and funny. It takes full advantage of the sexuality of the women it features and it also puts to use the sexuality of some very weird Olympians. Gentlemen Prefer Blondes doesn’t let any of its assets go to waste because it knows those are its strongest point. I don’t think there is a moment when either Jane Russell or Marilyn Monroe aren’t on screen, and since they imbue the film with a riveting pulse that is a good thing. 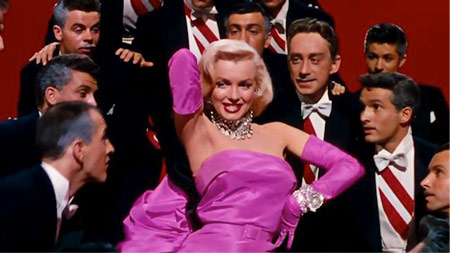 One sequence that did strike me as a bit odd was the Miss Russell number with the scantily clad male Olympic athletes. It was a fine song and it was fun to listen to, but there was a heavy hint of homoeroticism underneath that song and in the mannerisms and dancing style employed by the men. I didn’t mind it, it wasn’t a bad thing, but it was a bit peculiar to see in a 1953 mainstream Hollywood movie. Outside of that all the songs clicked, the performances worked with the songs and the entire concoction mixed together for a fun romp.