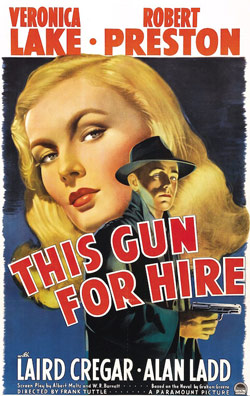 Still somewhat groggy, he prepares himself for an upcoming job, with viewers left in no doubt as to what that might entail once he loads up his pistol. Raven is, to put it bluntly, a stone-cold killer who carries out hits for clients. Today the client is Willard Gates (Laird Cregar) a powerful man working for a large chemical company and the target is an unfortunate individual who has in his possession an extremely important formula. It is not long before Raven returns the formula to Gates that the latter double-crosses him via payment with marked bills. Raven sets himself out for revenge, but a detective named Michael Crane (Robert Preston) on his trail and, against all odds, the detective's magician signer fiancée Ellen Graham (Veronica Lake) makes his vendetta all the more challenging to carry out.

This is the film noir that made Alan Ladd a hot star after many years as a struggling actor. The film teamed him with Veronica Lake, whom he would successfully work together with for numerous other films during the 1940s. It helped that they were both short and photographed well together. When the film first came out, Ladd only received fourth billing. 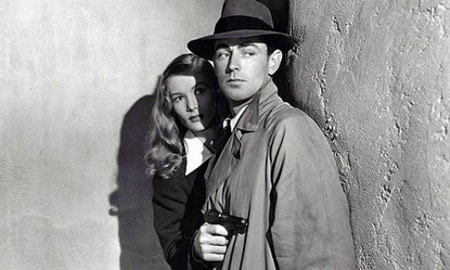 Ladd plays Raven, a psychotic killer who never smiles and always wears a trench coat. He's a victim of a terrible childhood — his criminal father was executed and his mother also died when he was young. While living with his hostile aunt, the youngster was reaching for some chocolates that she wanted to use to bake a cake–and to stop him she put a hot iron to his left wrist leaving him permanently scarred. In return he slit her throat and spent the remainder of his childhood in reform schools. What followed was a life of ruthless crimes.

The film opens in a dumpy San Francisco hotel room, where Raven goes bonkers and slaps and then rips the dress of the hotel maid when she chases a stray cat away. He has an affinity for feeding stray cats because he considers them his lucky charms and he admires how independent they are. After that incident he hurries over to the apartment of a Mr. Baker, who is the paymaster in the chemical firm of the person he is blackmailing. He shows Raven the documents with formulas written on them and Raven shows him the money he's to get in exchange, but Raven suddenly pulls a gun from out of his briefcase and in cold-blood kills Baker and his secretary who had the bad luck of being in the wrong place at the wrong time. 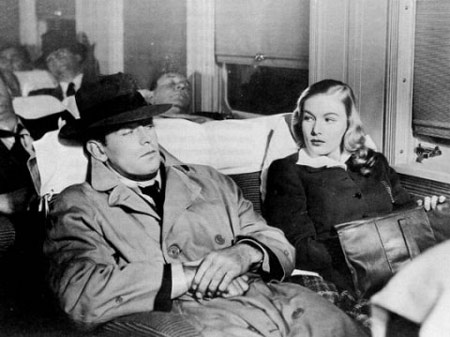 Raven has been hired to do the contract killing by a representative of the Los Angeles-based chemical firm, the obese and unctuous Willard Gates (Cregor), who is fond of peppermint candy and preying on women. Willard pulls a fast one and pays Raven off in “hot money” as the boss, Brewster (Tully Marshall), of the operation, a cripple who is wheelchair-bound, wants no loose ends left around to connect him with a plot to sell poison gas to the Nazis. It's his hope that the police can dispose of Raven, which is why he puts pressure on them to get him.

But Raven when he finds out the money is marked, escapes the police and takes the train to Los Angeles to get his revenge on Gates and his boss. Also on the train is Ellen Graham (Lake), a cabaret performer who sings and has a magic act and has been hired to work in Willard's L. A. nightclub. She has been asked by a senator to do her patriotic duty and spy for the government on Willard. The feds suspect him and someone else in his firm of dealing with the enemy, but need to get proof. As a coincidence, Ellen is engaged to the Los Angeles detective, Michael Crane (Preston), who is hunting Raven down.

Ellen and Raven accidentally sit next to each other on the train to L. A. and when Willard spots them together, he assumes they are working together to get him. He thereby wires the L. A. police to meet the train at the station, but Raven takes Ellen as a hostage and escapes to the freight yards. He stays with Ellen till the morning, and during that time she feels she understands him better after talking with him. Ellen talks him into acting patriotic and getting a confession from the corrupt businessman, which she says is more important than killing him.

The film's terse dialogue and atmospheric dark shots in the freight yards and the snappy presentation, when added on to Alan Ladd's menacing and laconic performance, made this a solid example of what film noir is supposed to be like. It was adapted from a Graham Greene story.