Down and out producer Max Bialystock (Zero Mostel), who was once the toast of Broadway, 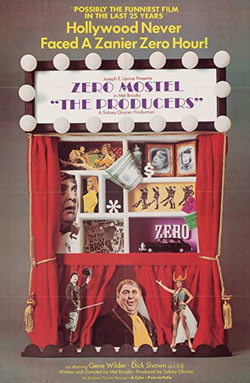 trades sexual favors with old ladies for cash contributions. Max's new accountant Leo Bloom (Gene Wilder), offhandedly muses that if Max found investors for a new production that turned into a flop, he could legally keep all the extra money. The duo begins to put together the worst play possible, titled "Springtime for Hitler", with a terrible director and a hippie-freak star.

Having once reached the pinnacle of Broadway success, producer Max Bialystock now funds his disastrous plays by giving little old ladies one last thrill before the cemetery. When Leo Bloom, a meek and nervous accountant, drops by to do his books, he hypothesizes that if one were to oversell a production, more money could be made off of a flop then a hit. 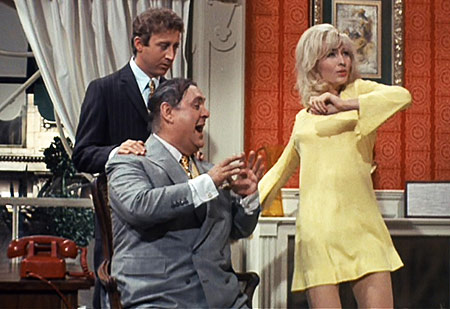 From then on, the partnership of Bialystock and Bloom  is forged and the duo sets out to stage the worst musical in the history of Broadway. Mel Brooks' debut film "The Producers" is a movie so hysterically funny that I was cracking up just reading over the plot synopsis. Brooks' wry and outlandish film is an unrelenting comic romp, from a script that won him the Original Screenplay Oscar. As the rotund and depraved Bialystock, Zero Mostel is an inimitable ball of comic energy and the equally incomparable Gene Wilder is just as wonderful as the manic and inconsolable Bloom.

After the uproarious opening scenes between Mostel and Wilder, the subsequent ones showcase several hilarious performances as the duo assembles their colossal bomb: Kenneth Mars as the demented Hitler loyalist and playwright. Christopher Hewett as the cross dressing world's worst director who holds the opposite opinion of himself. Lee Meredith as the curvy Swedish secretary. Dick Shawn as the drugged out leading man.

Brooks took his film to Broadway many years later and found smashing success, and having watched the movie where Nathan Lane and Matthew Broderick reprised their stage roles, I found this to be the equivalent of someone remaking Citizen Kane. Not that Lane and Broderick weren't up to the task, and Brooks' script wasn't as fresh as always, but the hilarity of the original and the manic chemistry between Mostel and Wilder can never be replicated.