Married couple Lucy and Jerry Warriner both suspect the other of cheating and find themselves in divorce court. 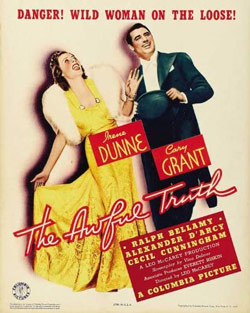 The divorce is granted - the only point of contention is who gets their dog, Mr. Smith. They soon have significant others. Lucy starts seeing her neighbor from across the hall, Daniel Leeson while Jerry is seeing Barbara Vance. The two are soon going out of their way to sabotage the other's relationship. Having succeeded, Jerry and Lucy find themselves alone in her aunt's country house realizing the mistake they've made.

Cary Grant and Irene Dunne play Jerry and Lucy Warriner, a couple who have been married so long they've lost sight of the fact that they're still crazy about one another. The film opens with Jerry belatedly attempting to acquire a tan in a New York athletic club after pretending to his wife that he's been in Florida for a week. We never actually find out what Jerry has been up to when he was supposed to be in the Sunshine state, but we can have a good guess, and, whatever it was, he didn't see a lot of sunlight while he was doing it. 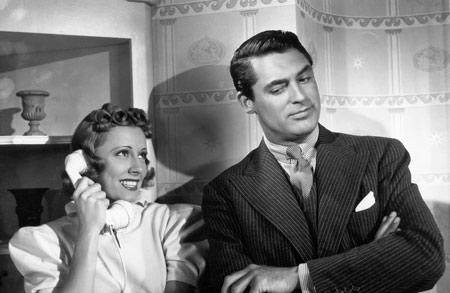 Jerry's slight irritation that Lucy isn't home to greet him upon his return becomes a major case of the sulks when she eventually shows up with Armand Duvalle (Alexander D'Arcy), her smug French music teacher, claiming that they had to spend the night at an inn because his car broke down on the journey home from a recital. When Lucy then discovers that Jerry hasn't been to Florida at all, tempers flare to the degree that they each agree to a divorce.

The only bone of contention between them is who gets custody of Mr. Smith (Skippy the dog, familiar to classic movie watchers as Asta in the Thin Man movies, and with whom Grant would be reunited in the following year's Bringing Up Baby). Lucy eventually wins custody, but Jerry is entitled to visit a couple of times a month, and it's during one of these visits that he meets Daniel Leeson (Ralph Bellamy), a well-meaning but dull mother's boy who has been courting Lucy since the split. As the end of the ninety days it takes for the divorce to be legally finalised draws ever nearer, both Jerry and Lucy come to realise that they're making a terrible mistake, but each of them is too pride to be the first to admit it. 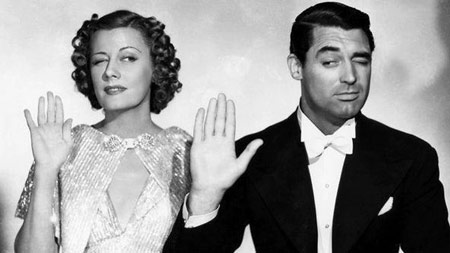 There's a lot going on under the surface of The Awful Truth, and the film's sophistication lies in the persistent sexual subtext rather than in the characterisation of Lucy and Jerry. It's there in the scene in which Lucy tries to prevent Daniel from passing the threshold of her apartment because Jerry is already there, hiding behind the door that seals that threshold, and poking Lucy with a pencil to make her laugh at Daniel's earnest, but hopelessly sappy, love poem; it's also there - and less subtly so - in the scene in which Lucy and Jerry are each escorted home on the front of policemen's motorbikes, and Lucy begins bouncing up and down in order to sound her driver's horn. It's a sophisticated subtlety that modern movies lack because they're no longer constrained by the implacable rules laid down by the 1930s Production Code, which essentially forced writers of that era to dig deep in order to express the sexual element of their stories without falling foul of the censors.

Both Cary Grant and Irene Dunne - one of Hollywood's less well-remembered 'Golden Era' actresses - nail their parts, exuding effortless class and likability in roles that, on the surface at least, are pretty shallow and aimless. Ralph Bellamy offers superior support as the dull but harmless oil man who falls for Lucy, but who lacks the charisma of her soon-to-be ex-husband, and pretty much carved a niche for himself in similar roles for the next decade or two. Also making her mark in a small but noticeable role is Joyce Compton as Dixie Belle Lee, a nightclub singer with whom Jerry briefly dabbles, who has a unique twist to her act. These four stand out in a cast filled with supporting actors of a typically high calibre for this type of production, and elevate what is essentially a series of comedy set-pieces loosely strung around an entirely predictable plot into one of Hollywood's enduring classics.