In this film based on John Steinbeck's epic novel, Cal Trask (James Dean), the son of a California farmer (Raymond Massey), feels that his father cares only about his brother, Aron (Richard Davalos). 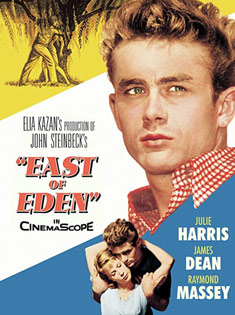 When Cal embarks on a business venture to gain the favor of his dad, he finds himself dealing with his estranged mother (Jo Van Fleet), now the owner of a brothel, and tensions in the family rise even further when he begins to fall for Aron's girlfriend, Abra (Julie Harris).

What it's about. Based on a John Steinbeck novel, and set in a small California town in 1917. Caleb (James Dean) and Aron (Richard Davalas) are young adult brothers of failed lettuce shipper Adam (Raymond Massey). The moralistic and deeply religious Adam has a like-minded son in Aron, but Caleb is moody, distant, and rebellious. He also nurses a crush on Aron's empathetic girlfriend Abra (Julie Harris).

In supporting roles we have Adam's former wife Kate (Jo Van Fleet), the mother of Caleb and Aron. Kate runs a whorehouse in nearby Monterey, the antithesis to Adam's life philosophy. Burl Ives is once again a father figure, playing the local sheriff. Harold Gordon is a German immigrant harassed once the U.S. enters World War I. Will Hamilton is a businessman who partners with Aron in a string bean venture.

How others will see it. East of Eden is best known today as providing the first lead role for handsome, quirky, and young James Dean. Dean would promptly die in a tragic car accident, transforming him into instant icon status. His only other two films, Rebel Without a Cause and Giant, benefitted more from his untimely death.

How I felt about it. But East of Eden was easily the best movie of the three. For one thing, it was directed by Elia Kazan, one of the all-time great Hollywood directors. Kazan's career was eventually derailed by his testimony before the Commie witch hunt congressional committee.

But if he hadn't testified, his career would have been derailed then and there. And I suspect that nearly everyone who later spoke against him would have done exactly the same thing if they were in the same position, which makes them hypocrites.

Is it an ethical lapse to answer a congressional subpoena? Could it be that the committee was to blame, and by extension, the voters that elected them? Per Walt Kelly, we have seen the enemy and it is us, and not film directors acting on studio legal advice.

But back to the movie. Dean is clearly from the Marlon Brando school for young actors, whose principal dictate is that actors should communicate nonverbally whenever possible. The impossibly naive Julie Harris asks Dean about his relations with "bad" women, and Dean sort of smiles, and sort of shrugs. Anxiety is expressed by forming fists, raising arms, and freezing with a countenance reminiscent of Edvard Munch's surreal masterpiece "The Scream."

The anti-hero acting clearly resonated with youth of the day, who actually briefly abandoned their television sets to see Dean in his three blockbusters. But the acting seems over-ripe at times. Dean isn't the sole culprit; the less heralded Davalas completely loses it once he learns his saintly dead mother is very much alive and runs a house of sin. Oh, the shock! Methinks I'll enlist in a war I despise, and shatter train window glass with my forehead. It's enough to give daddy a dramatic stroke, then and there.

But that's not all, the German-American Gordon makes trouble for himself by continually disagreeing in public with anti-German propagandists. Which he does with complete innocence. Is everybody naive in Salinas?

Which begs the question, how can a movie that is so bad, actually be so great? This has everything to do with Kazan, who knew that the world within a movie has its own alternate version of reality. A world in which nobody simply sits down to enjoy a good book, such as Steinbeck's "East of Eden."