For (full) Festival participants only

To be held in the main theatre auditorium.

Coffee is provided but patrons are expected to provide their own lunch - either by bringing it hence the "brown bag" - or ordering it. The surest way to get your lunch is to order in advance by adding the $10 option when you buy your pass.  You make your choice of sandwich at the desk in the lobby of the Capitol before 1:00 pm on Saturday.

In the early 1930s, stories of "bloody bootleg rackets" and "bootlegger bandit death trysts" dominated the newspaper headlines, with Bonnie Parker, the real life "cigar-smoking gun moll", particularly capturing the public's imagination. Gangster movies, such as Little Caesar (1931) and Scarface (1932), were box office dynamite and, although the films' protagonists were usually men, the genre did provide edgy and complex roles for women during Hollywood's morally ambiguous Pre-Code period.

From Ann Dvorak's breakthrough role as Paul Muni's ambitious little sister in Scarface to Joan Blondell's "peroxide mob boss" in the surprisingly feminist Blondie Johnson (1933), the women of the Pre-Code era's gangster movies proved that they were much more than just "molls and dolls". 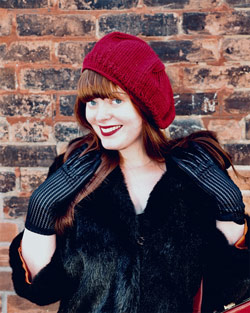 Heather Babcock is an aficionado of Jean Harlow and pre-Code Hollywood films and writes about 1920's and 1930's film and pop culture on her blog Meet Me at the Soda Fountain. Her début novel, Filthy Sugar, was published by Inanna Publications in 2020 and was inspired by the "feisty dames" of pre-Code movies. Heather has had short fiction published in many literary journals, including Descant Magazine and The Toronto Quarterly. A collection of her short stories, Of Being Underground and Moving Backwards, was published by DevilHousePress in 2015. She is a co-founder of the Redhead Revue (a reading and classic movie series) and has hosted and organized reading and music events in Toronto. Heather is a member of the Writers' Union of Canada.

NOTE: This seminar is for holders of Festival Passes only.