It all started with a fire at Cobourg's Dressler House - the birthplace of early Hollywood film star Marie Dressler but then housing a restaurant.  On Sunday, January 15, 1989, John Wilkinson, owner-manager of Dressler House, discovered a fire in the wee hours of the morning.  Firemen battled the blaze well into the following day and the extensive damage 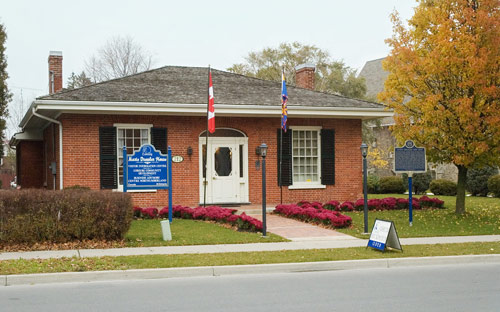 almost resulted in complete demolition but “Dressler House” was declared basically sound.  Since the building was an historic Cobourg landmark, a group of people led by Cobourg and District Chamber of Commerce director Bill Patchett, decided to raise funds to restore the building.  Thus was formed the Marie Dressler Foundation.

Together with a group of film enthusiasts, it was decided that one of the fundraising efforts would be a festival showing the films in which Marie Dressler had starred.  This seemingly fantastic idea grew into the present form, in which we show a variety of films generally made at least 50 years ago.

The efforts of the Foundation were successful and the house was restored.  For many years Dressler House operated as the home of the Chamber of Commerce but is now owned by the town of Cobourg but leased to the Marie Dressler Foundation.  More work by the Foundation resulted in not just a Marie Dressler Museum but an expansion to include two other early Canadian female film stars: Norma Shearer and Mary Pickford. It's now called the Canadian Women in Film Museum.

The major fundraiser for the Foundation continues to be the Vintage Film Festival.

Since inception of the Festival, about a dozen films have been shown each year  - except a pause in 2020 due to Covid-19.  The links below take you to a list of the films although the list has been split into 3 parts.

We have also taken photos of the Festival each year and they are also available.